“We are not superstitious in our profession, sir,” replied the doctor, “but the sea makes people so.”

The story this week moves the haunted house concept to sea! I started these stories with a haunted room in The Red Room so here is a haunted cabin on a ship.

This is a story whose fame precedes it, I believe. So much so that I think I’d be surprised to find someone that hasn’t heard of at least the basic premise of the story: someone is granted three wishes but finds that the wishes don’t quite work out the way they had intended.

This is not a new idea of course, but W.W. Jacobs manages to perfectly capture the horror of being granted these wishes and their unintended consequences. This theme shows up quite often in modern literature, movies, and television shows (to varying effect).

On the Brighton Road

This is a quite short story by Richard Middleton that I love for its simplicity and brevity. In talking about the story here, I drop a couple of spoilers. If you’ve never read it before scroll down now. Do come back when you’re done, though.

A little too late I realized that it might be fun to do a daily post of my favorite short ghost stories through October (to honor my favorite month and holiday!). Last year I shared one of my personal favorite stories, “Smee” by A.M. Burrage.

I will do my best to try and get a few good stories out this October. I feel like I could probably at least get one good story every week until Halloween!

Many of these stories are ones I first encountered in what I consider to be the definitive book on the subject: The Oxford Book of English Ghost Stories edited by Michael Cox and R.A. Gilbert. Their introduction is wonderful to read and really provides a fantastic overview of the rich literary history of the ghost story. As they note in the opening paragraph of their introduction:

“Whatever we do with the dead they will not go away. Whether we entomb and isolate them or scatter their ashes, they remain as ghosts in our memories and faced with their continuing presence we have no option but to learn to live with them. Our most effective way of accommodating them is, perhaps, to encapsulate them in stories, either as the vengeful or grateful dead of folklore, as the dull prosaic phantoms of psychical research, or as the less predictable revenants of fiction.” Michael Cox and Robert Gilbert, Introduction - The Oxford Book of English Ghost Stories

I am certain to be including other stories from this collection as this particular book has greatly influenced and guided my love of short ghost stories.

This particular story comes from H.G. Wells (he of The Time Machine, The Island of Doctor Moreau, The Invisible Man, The War of the Worlds, and plenty other pieces of fantastic fiction).

Setting up jrnl for Journaling

There’s no shortage of posts and news items that tout the benefits of keeping a journal. It seems like everyone loves to tell you about the positive effects it will have on your psyche, mental-health, sex life, and the happiness of your pets.

I’m not sure about all of those but I can see how keeping a journal can help in one very important way: it gets you writing. I am not a professional author (or even an amateur) but this seems like a Good ThingTM in general.

“If you want to be a writer, you must do two things above all others: read a lot and write a lot. There’s no way around these two things that I’m aware of, no shortcut.” Stephen King, On Writing: A Memoir of the Craft

Writing down your thoughts seems like it helps to make so many abstract ideas more concrete. Being able to review the words and getting a bigger picture of the thought process should surely help to organize and arrange things in a way that makes sense (or in other surprising ways perhaps not considered at first).

I can always use help in the writing department, so I’ve decided to start keeping a journal as well. The problem is that I like to keep things as simple and computer-agnostic as possible. So I thought I’d document my approach and rationale to setting up a journaling system that can suit the way I computer.

Just over a year ago I started a redesign and rebuild effort for my friends over at https://www.rawtherapee.com. Then life happened.

After a long hiatus I was finally able to spend some time working on it and we finally launched it just a few days ago!

For those not familiar with the project, RawTherapee is a wonderful tool for developing raw photographs. It’s one of the first Free Software raw processing tools I used (prior to that it was the classic UFRaw project as a pre-cursor to bringing the image into GIMP).

I’ve been lucky enough to be friends with the project for years now. We migrated their old forums to discuss.pixls.us way back in October 2015 and I get to chat with them almost daily. They are an incredibly awesome group of people!

Blackjack. It’s one of the most even odds game you’ll find in a casino short of flipping a coin. Assuming the house rules are favorable, the house edge when playing perfect blackjack strategy is as low as 0.5% (you’ll lose ½ cents for every dollar you bet).

tl;dr - To speed up loading a large HTML table on the client, start with the table CSS set to display: none;. Once the document is ready, set it back to display: table;. This reduced my client-side render time from 60 seconds to 6 seconds on a table with ~400,000 cells.

For those unfamiliar with the meeting, it’s an annual gathering of Free/Libre software projects and artists. There’s an amazing community of users, developers, and hackers that attend every year to talk about all sorts of cool topics like fonts, photography, painting, performance, and many other things that start with the letter “p” (printing? pontificating? pixls?).

The “pixls” is a bit of a joke, but in reality I’m cautiously optimistic that we’ll get a chance to assemble quite a few pixls.us nerds there. Friends from both darktable, RawTherapee, and many more actually live in or near Saarbrücken and I am super excited to see them!

Wanting to help the organizers, out I took a stab at designing a website for them. They use Wordpress for the site, so I had to figure out theming in Wordpress, but I had some fun doing it.

In the end they didn’t use what I cooked up, but I personally really liked it. Rather than let it languish in obscurity, I figured I would at least share it here: 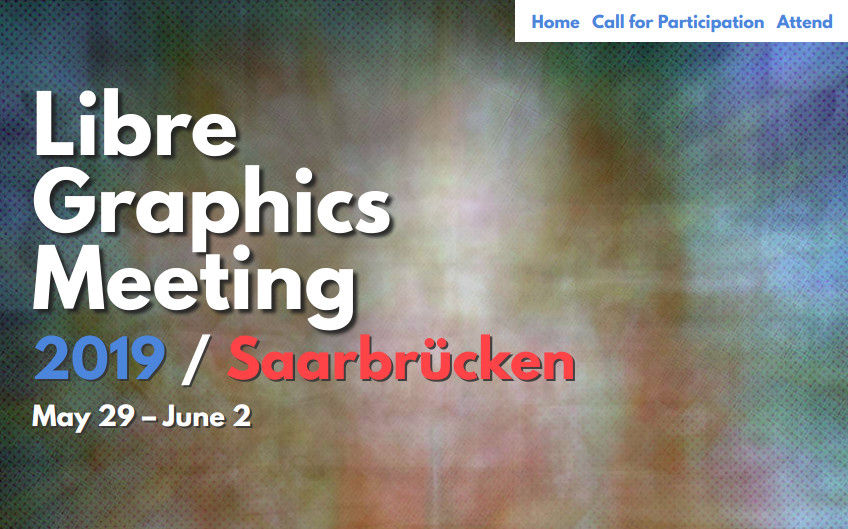 I’m a huge fan of The League of Moveable Type’s fonts, and their League Spartan is an awesome, bold, loud font that demands attention (like me?). 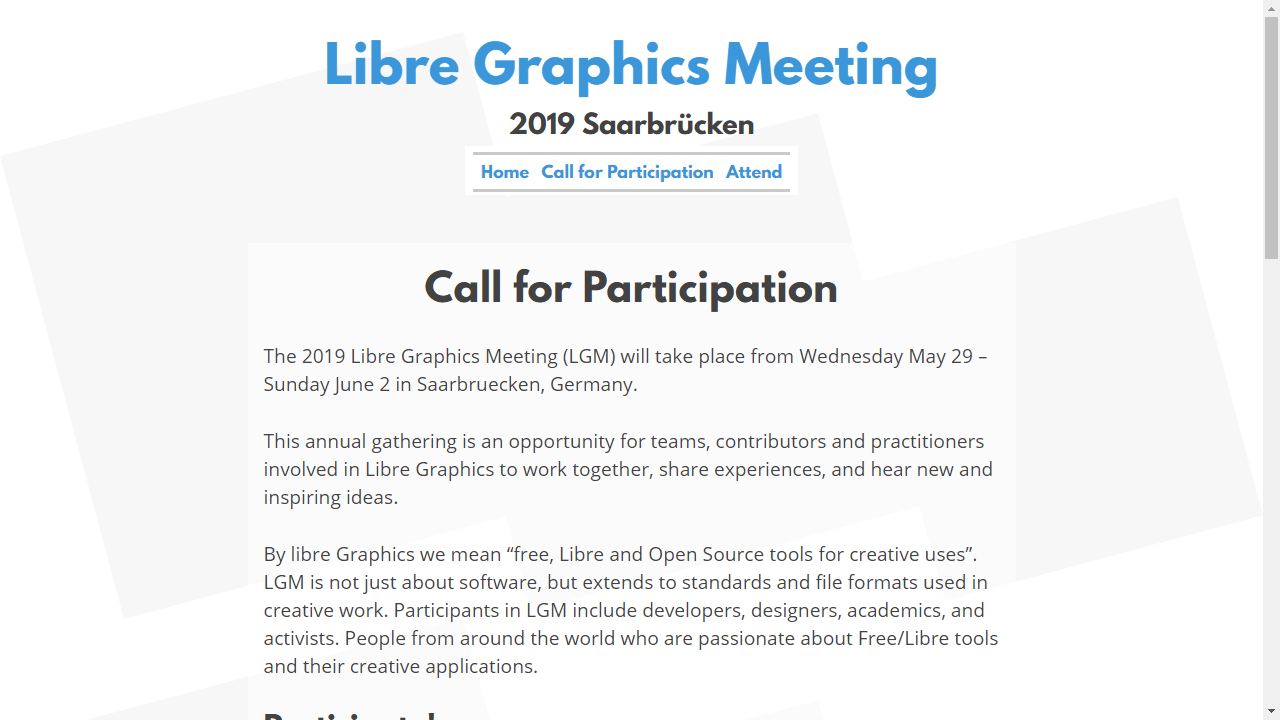 I made some decent progress on the overall design before I realized it wasn’t going to be used, so there’s still some rough edges that needed to be finished. I also generated a static version of the site I had setup on my host (no need for yet another Wordpress site hanging around the internet).

This is one of those cases where I kind of liked the overall course the design was taking and will keep it in mind to cannibalize for future projects.

Being a part of a community of smart folks means that inevitably there will be personality clashes. I was reminded of this recently, and found myself needing to remember to be empathetic.

darix was kind enough to link me this wonderful post from Jeff Bigler over twenty years ago that is still quite relevant today:

All people have a “tact filter”, which applies tact in one direction to everything that passes through it. Most “normal people” have the tact filter positioned to apply tact in the outgoing direction. Thus whatever normal people say gets the appropriate amount of tact applied to it before they say it. This is because when they were growing up, their parents continually drilled into their heads statements like, “If you can’t say something nice, don’t say anything at all!”

“Nerds,” on the other hand, have their tact filter positioned to apply tact in the incoming direction. Thus, whatever anyone says to them gets the appropriate amount of tact added when they hear it. This is because when nerds were growing up, they continually got picked on, and their parents continually drilled into their heads statements like, “They’re just saying those mean things because they’re jealous. They don’t really mean it.”

So, nerds need to understand that normal people have to apply tact to everything they say; they become really uncomfortable if they can’t do this. Normal people need to understand that despite the fact that nerds are usually tactless, things they say are almost never meant personally and shouldn’t be taken that way. Both types of people need to be extra patient when dealing with someone whose tact filter is backwards relative to their own.

Copyright © 1996, 2006 by Jeff Bigler.
Permission is granted to redistribute this text in its entirety, provided that this copyright notice and either the URL for the page (http://www.mit.edu/~jcb/tact.html) or a link to it is included. All other rights reserved.